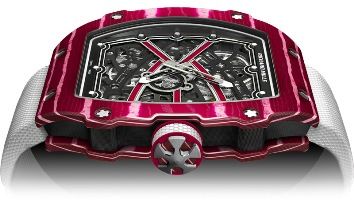 It’s not the first time Richard Mille creates high-end watches inspired by sports stars. Let’s just remember the company’s partnership with a Spanish tennis player Rafael Nadal, a French racing driver Simon Pagenaud, and an American golfer Cristie Kerr. However, these new release watches are truly exceptional for a simple reason: the RM 67-02 is the lightest self-winding mechanical model ever created by Richard Mille. Its weight is only 32 grams. Moreover, the High Jump and the Sprint both come in unique cases made from ultralight, shock-resistant materials Carbon TPT and Quartz TPT.

RM 67-02 High Jump
The Richard Mille RM 67-02 High Jump luxury watch is dedicated to Mutaz Essa Barshim, a Qatari field and track athlete specializing in the high jump. Designed in magenta and white, the colors of the Qatar flag, this model is just as accurate and light-weight as the Olympic medalist himself. Moreover, being very flat and flexible, it is created in such a way that “Mr. High Jump” can wear it even during his jumps.

RM 67-02 Sprint
The green and yellow Richard Mille RM 67-02 Sprint is dedicated to another Olympic medalist Wayde van Niekerk. This South African field and track athlete is currently the only sprinter who holds the world best time in the 100, 200, 300, and 400 meters. Created specifically for sportsmen dealing with challenges in the domain of the smallest fraction of a second, this luxury watch is undoubtedly a perfect choice for the “Best Male Athlete of the Rio 2016 Olympics.” 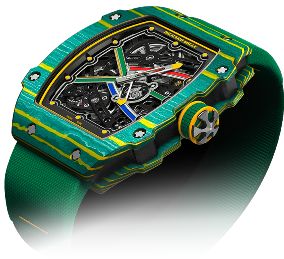 The RM 67-02 model features a 38 mm case, with bezels made from Quartz TPT and case back made from Carbon TPT. Its skeleton dial reveals hand-decorated DLC-treated titanium bridges visible through the sapphire crystal. Each RM 67-02 luxury watch is powered by an in-house self-winding mechanical movement – caliber CRMA – that features 25 jewels and operates at the frequency of 28,800 vibrations per hour. Its thickness is only 3.6 mm. Besides, the RM 67-02 boasts 50 hours of power reserve and has water resistance up to the depth of 30 meters. 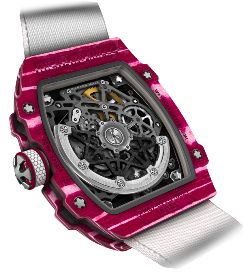 It is also worth noting that since the wearer comfort and ergonomics of all timepieces are a constant concern of the Richard Mille brand, the new RM 67-02 sports models are fitted with hyper elastic, non-slip, and seamless straps. In general, such a combination of ultralight materials and an overall design of brand new watches make them practically a second skin for the wearer.

According to Richard Mille, both the RM 67-02 High Jump and the RM 67-02 Sprint high-end watches will be worn by athletes during the World Championships in Athletics at the Olympic Stadium in London. The announced price for each of the brand new watches is $120,500. 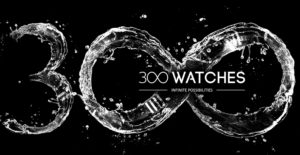